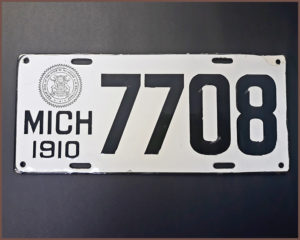 With 3,288 miles of freshwater shoreline, Michigan and its two major peninsulas jump out from the map. The Great Lakes State is a place rich in natural beauty and human ingenuity. And when the state’s motorists hit the road, they share a bit of home through their automobiles’ license plates.

Stefek’s Auctions and Estate Sales will offer a number of these Michigan license plates at auction on May 28, 2020. Plates available include years 1910, with examples from select years through 1938. For complete details, click here.

Currently, the State of Michigan offers a “Standard Plate” that features blue numbers and letters on a white background with “Pure Michigan” at the top and “michigan.org” in white along a blue background on the bottom. The “Mackinac Bridge Plate” is a graphic illustration of the historic five-mile long engineering marvel that physically joins the Upper and Lower Peninsulas.

Also available is the “Spectacular Peninsulas Plate,” which contains a wealth of information about Michigan, reflected in three individual story lines. Along the top quarter runs a graphic representation of Detroit’s skyline that morphs into trees and forests on the right. In the middle belt of the plate is a map of the Great Lakes, depicting the northern and southern peninsulas, and forming the backdrop for the identifying numbers and letters. Along the bottom third of the plate is a depiction of the Mackinac Bridge and the phrase “Great Lakes Splendor.”

The first automobile licenses were issued by the City of Detroit in 1903, a round badge similar to a dog tag. Later, owners were responsible for creating the plates themselves. Up to four numbers were displayed in the center with the letters M-I-C-H and a period, arranged vertically on the right. Copies were displayed at both the front and back of the car, often hanging on a plate strapped to a bar, like a shingle outside an office or storefront.

In the 1920s, the state began to manufacture and issue steel license plates. The Depression in the 1930s brought economic hardship and Michigan began to issue plates for six months, easing the annual cost into halves for motorists, a practice that continued until after World War II.

In 1954, Michigan added the phrase “Water Wonderland” to its license plates. The slogan entered America’s consciousness and was used through 1964, boosting boating and summer tourism. The following year, it was modified to “Water-Winter Wonderland,” giving a boost to snow sports.

Michigan began to issue historic and authentic license plates in 1956 for antique vehicles used in parades, fairs, car shows, swap meets, and other events. While valid every day for special purposes, historic vehicles can only be used for routine and daily transportation during the month of August. Authentic plates are issued from the same year as the historic vehicle was manufactured.

From 1968 through 1983, with the exceptions of the years 1976-78, Michigan plates included “Great Lakes State” in addition to the state name. In 1976, the state issued a red, white, and blue plate to commemorate the United States’ bicentennial year. In use through 1978, the patriotic plates included the numerals “76.”

The special stories of the Great Lakes State continue. The license plates on its cars still serve as unique identifiers of vehicles and markers of special times. And each person who knows Michigan keeps in their heart a most special part of the world.