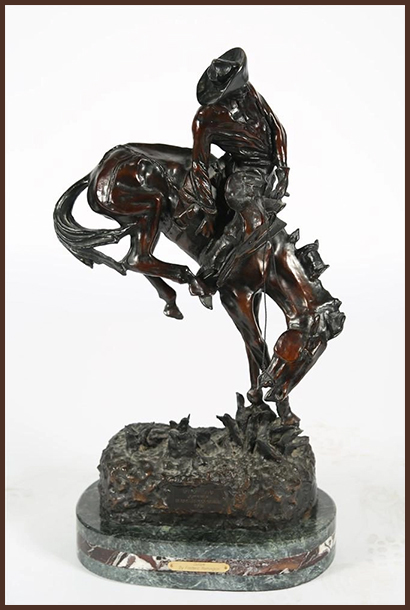 Bronzes after Remington and More

Who was Frederic Sackrider Remington?

You know a Remington sculpture (or one in his stye) when you see one. It’s iconic. It’s American.  It represents the quintessential Old West.

Cast in bronze, many of the original works were created through the lost-wax casting process or the sand-casting method to provide utmost accuracy and detail. Several American art museums host his work, including the National Cowboy & Western Heritage Museum in Oklahoma City, the Metropolitan Museum of Art in New York City, and the Buffalo Bill Historical Center in Cody, Wyoming. Remington also has a museum dedicated to his art: the Frederic Remington Art Museum in Ogdensburg, New York. This museum, created from his estate, houses over 10,000 pieces of original works, personal artifacts, memorabilia, and more

As interesting as his work, there are other fun facts about Remington that make him an American treasure- and a great topic for endless stories.

Several bronzes after Frederic Remington will be on offer at the Winter Furniture and Décor Auction on Jan. 14. Featuring several mid-century pieces, fine art, taxidermy, swords, and a collection of decorative items, the event will be held online only with phone and absentee bidding.

Sculptures include “Old Dragoons,” “Rattlesnake,” “Outlaw,” and more alongside other bronze works by artists such as Martin Duque, Barbedienne, and anonymous artists.

The Winter Furniture and Décor Auction also offers mid-century design includes pieces by Paul McCobb, Dunbar, Niels Moller, and Tobia Scarpa for Knoll. Highlights of the mid-century design category include a c.1950s-60s JBL Metregon speaker cabinet, a dining set and cabinet designed by Paul McCobb for the Connoisseur Collection, a set of Edward Wormley for Dunbar nesting tables, and more.

Love to shop for unique items from the comfort of home? Visit our Buy It Now page.

We offer Luxury Storage in a secure, insured, climate-controlled location.

Need assistance? We are happy to help. Please contact us!